Oh what to do….. so much happening but sat in the middle of it all. So rather than risk the nearly completed pieces for the Garden Series, it has been going back to an abandoned piece and doing some creative bullying.  It is now 2 pieces.  One done as planned, the other has been a victim of a good idea. 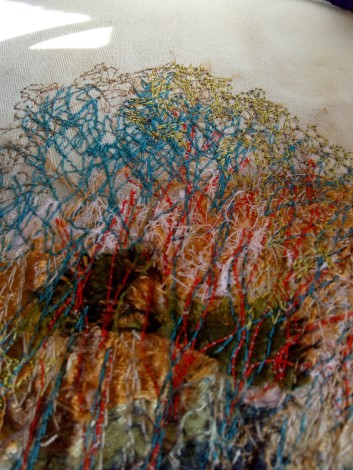 This is the start – the basics were already down so it was lots of quite intensive building up of colour, volume and textures.  As usual nothing special used, 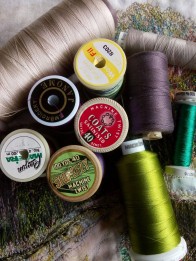 just a range of motley threads, fished out of all sorts of corners and all sorts of finish and vintage. Yes the older threads can throw the tension off but they give a different character to the surface so I don’t mind the frustration.

The slide show is the evolution over the last few days- asnormal I forgot to take a pic before I started – the brighter colour fabrics in the foreground  are new as is the green stitching on the far hedge.   can you see the changes?

And as for part two – the tree is a remnant of an earlier piece and a new addition. All kinds of subtle things have changed but the tree is the boldest!

Currently they are both placed into frames for me to decide whether they look right or not.  Already have a list of things to change but whether I do or not they will  both benefit from pressing out and stabilising!

Don’t forget I have workshops for freehand machining  on at the moment – the next one is the 25th and is getting to grips with working with colour.  I also will have some work at Helmsley Walled Garden  and then at the York Textile Artists Winter Exhibition  16/17th November. 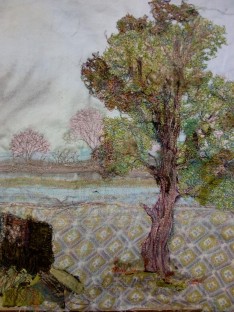 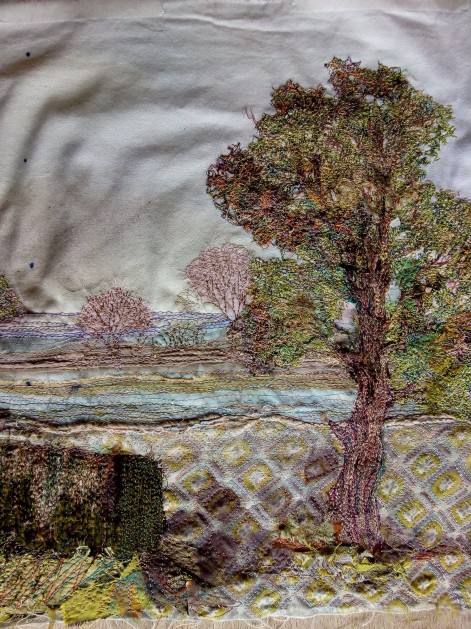 Sunshine, warmth and of course rain (it is Britain), and the garden is getting busy.  In the quest to be too busy to mow the lawn or cut the hedge I have been quite diligent  in exploring the idea of the textile garden. 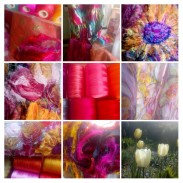 It began well; layers, lines shapes, but then it went all cutesy and fluffy minded.  OK, one target was to create an easily accessible method and style for teaching.  Mackintosh flowers later and that was done, shame about the rest. 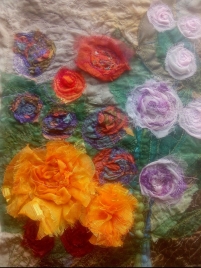 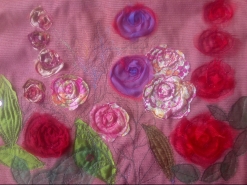 In the time honoured manner I tried to make progress by going sideways. Sketching focused the mind and made me think about how I wished to use line, colour, shape etc. Then a taster pack of Setacolor fabric paints arrived. The initial experiments with them were only partly successful – 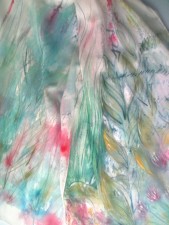 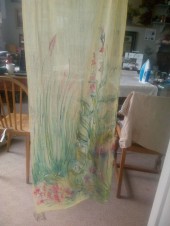 I was playing with getting the balance of line and colour wash,  handling the interaction and density of colours and then seeing what would happen with a spot of over dyeing. So, the lines are tooo heavy in one area and too fugitive in another, the colours  went muddy but it has potential.

And then, can I translate drawing and painted lines into stitch? For some reason I chose a touchy feelly base fabric rather than  flat calico-  a two tone velvet. I  trid to bleach it to break up the colour but very little happened apart from wreaking the pile so it is now rather crushed.  The rayon threads work well although the varigated fades in and out a bit too much.  Single lines are swallowed by the nap and colours will probably need to be more saturated than usual. The high contrast bobbin thread being pulled to the top surface is looking promising. 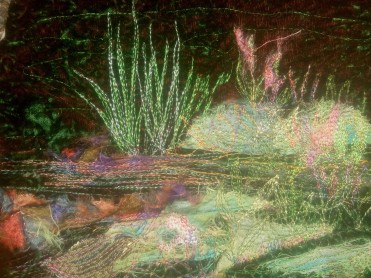 Questions will be about scale? how much definition or detail? how do the fabric inclusions work with the line? How much realism? is it visual texture or actual lumps and bumps?  Plenty to play with! Trying to re educate  is always a pain but I am beginning to like the jumbles/intricate layers of shapes and want more spaces and less lump. I have painted  some scrap silk to tear and apply with the same shapes and colours I want to stitch.  Quite looking forward to next week!

Thank you to all who supported my sale event, very sucessful though there are still a few pieces waiting for a new home. Check out my facebook or website for a fortnightly offer.  I have also volunteered to take over writing the monthly newsletter for the York Textile Artists group. I did warn them and hope they don’t expect me to be too sensible! 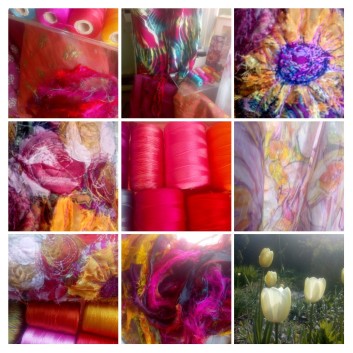 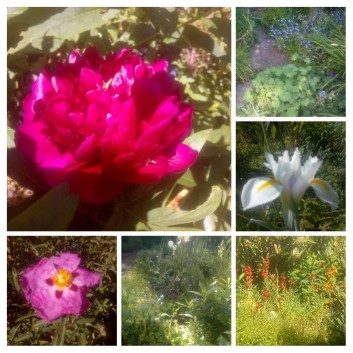 You may remember that I mentioned taking on a workroom supervisor job for the York Mystery Plays- well, that is where I have been and below is a tiniest snippet of what we have been doing.

These are a cycle of  plays telling  the Bible story, start to finish, and this year are held in the nave of York Minster. Basically this means they are big, in all ways. Traditionally they are put on by local guilds for the local people. These are a bit too big for that but most of the cast are locals as are the people running about behind the scenes making and doing. I have been  one of the people  translating and organising  the designs and intentions of the decision makers into tasks and actions for the volunteer costume makers. Not going to give you sneak peaks of the finished  stuff  or write about the “Biblical Basics” ,  of which there were dozens to make, many sagas to tell and the word “gusset” has new emphasis,    but….   meet Adam and Eve. 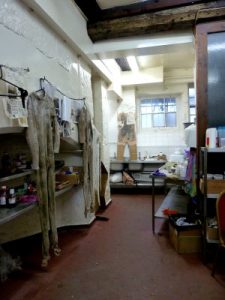 These were somewhat different from  the floor to ceiling robes – body suits which had to be made to look like they were emerging from the clay.  Janet ( the theatrical breakdown specialist) trusted us to get the base grime and grub in place, ready to start building a heavily  caked and encrusted top layer.   These are not finished yet, more Yorkshire clag and clarting up is required but you should get the idea. 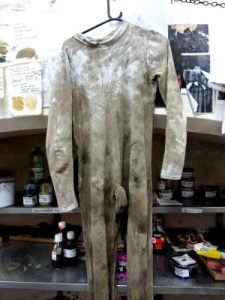 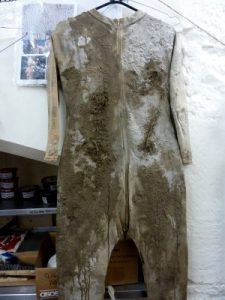 Eve is a little more advanced than Adam, proper crusty mud is going on.

The grub was  various colouring agents in textile binder, then plus some extras – wool fibre, puffer binder, polyfilla, etc, etc. 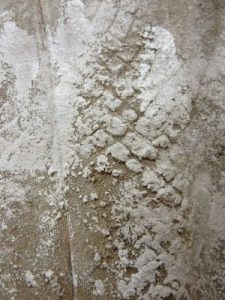 The heavier layers  were stippled , slapped, dribbled on,  as well as being elegantly placed, and carefully applied. It is the drying time that is the killer. Everything is overnight! 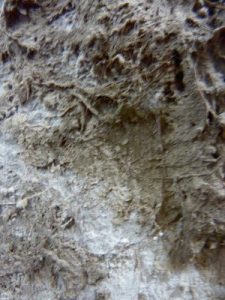 Link to my web page 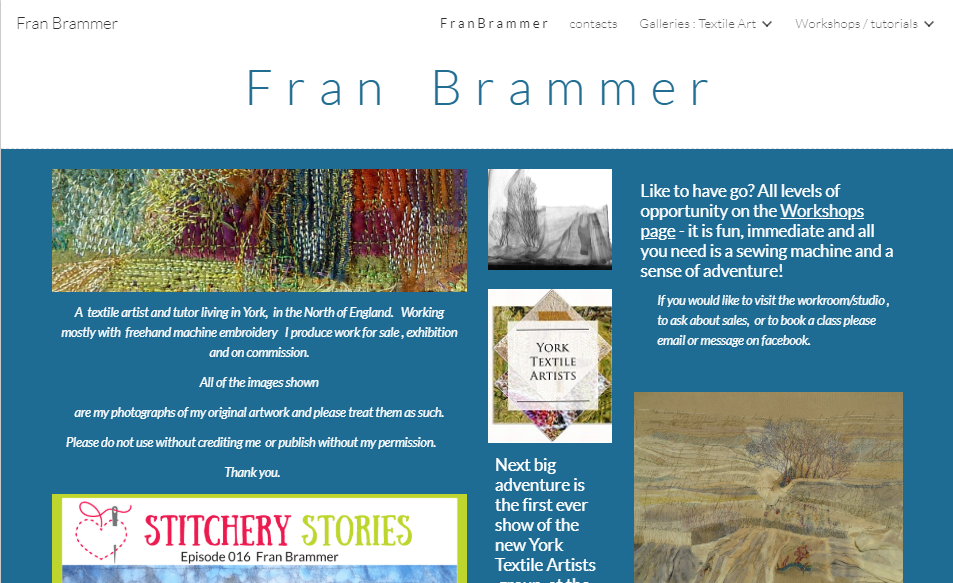 Artist based in York, working mostly in textiles, especially in freehand machine techniques
Major themes are drawn from the local landscapes, the Vale of York to the Yorkshire Dales.
Please see the 'Me' page for more information. 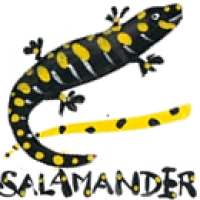 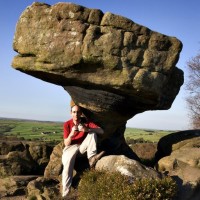 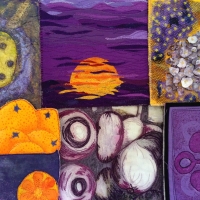 the blog - fabrics and other things

An alternative to the stereotypical fashion figure templates

A few of my favourite things